Oregon Arts Watch has hailed cellist and composer Nancy Ives for “demonstrating with attentive grace that technically challenging and sonically difficult music can still be beautiful.” Principal Cello of the Oregon Symphony and Instructor of Chamber Music at Lewis & Clark College, she also belongs to the intrepid new music group fEARnoMUSIC, plays with the Palatine Piano Trio and the Rose City Trio, and is an in-demand guest performer with groups such as Chamber Music Northwest, Portland Piano International, the Oregon Bach Festival, Third Angle, 45th Parallel and the Portland Cello Project.

Her formal education culminated in a DMA from the Manhattan School of Music and she had a varied freelance career in New York City, appearing with many new music ensembles, notably the SEM Ensemble, North-South Consonance and Musicians’ Accord, playing over a hundred premieres by composers such as Milton Babbitt, Chen Yi and Bruce Adolphe. Her special interest in new music led to recordings on the Opus One and Koch labels and her versatility led to soundtrack recordings for PBS and the Smithsonian. She appeared with Laurie Anderson and Brazilian pop star Gal Costa at the Brooklyn Academy of Music Next Wave Festival, with Nana Vasconcelos at The Knitting Factory and Merkin Hall, and recorded with rock star Lenny Kravitz.

Nancy’s interest in composing was reignited by a commission from the Portland Cello Project to write a piece for the album to e.s. and the follow-up additional movements for a concert by PCP in the Arlene Schnitzer Concert Hall. With the help of a grant from the Regional Arts and Culture Council, she has commissioned five leading Oregon composers plus herself to write pieces inspired by the Allemandes from the Bach Suites for solo cello. A recordings of these and of the music of Tomas Svoboda with the Palatine Piano Trio are in the works. Other works of hers have been presented by the Oregon Bach Festival Composer’s Symposium and fEARnoMUSIC. Nancy is co-founder of Classical Up Close, serves on the board of All Classical Portland and Classical Up Close, and is a past board member of the Oregon Cello Society and the Oregon Symphony. She blogs at nancyives.com. 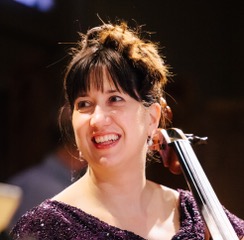